Acupuncture and its Effects on the Body

Acupuncture is the stimulation of specific points on the body using a variety of methods including needles, moxa (a Chinese herb that emits heat), injections, electrical stimulation, and laser. Each point is located on a meridian that transports and transmits qi throughout the body. Thus, stimulation of a point on a meridian can affect the physiology of the body and helps to restore balance to the body. There have been many scientific studies on acupuncture as well as the points themselves. Multiple studies have shown that acupuncture points correspond to areas where there are high concentrations of free nerve endings, blood vessels, lymphatic ducts, and mast cells and that stimulation of acupuncture points results in the release of beta-endorphins as well as serotonin, both of which result in pain relief. It is hopeful that as more studies are conducted that additional mechanisms of action will be identified.

Numerous studies show that acupuncture stimulation has the following physiological effects on the body:

Acupuncture has a cumulative effect. Although some patients will show improvement after one or two sessions of acupuncture, it often takes four to six treatments to before significant improvement is noted. As a rule of thumb, the longer the problem has been going on, the longer it will take to see a response. Although there is some variation depending on the condition, we typically recommend one treatment a week for the first 4-6 weeks. After that, the time between treatments usually gradually increases until either the condition resolves or a maintenance interval is reached. 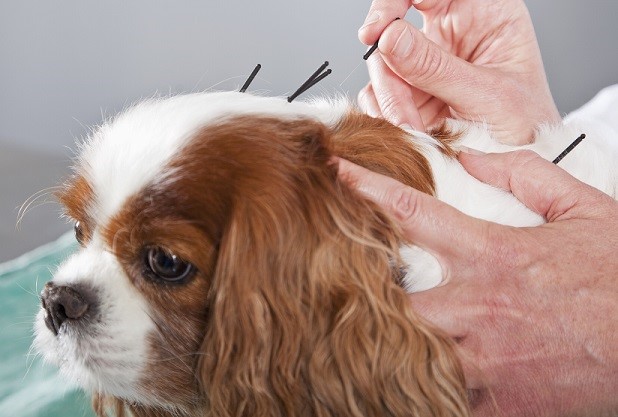 Tranquil Paws Veterinary is a veterinary practice that offers Acupuncture, Traditional Chinese Veterinary Medicine (TCVM), Chinese Herbal Medicine, and Laser Therapy to canine and feline patients. We are based on the upper east side of Manhattan and examine and are able to treat our patients in the comfort of their own homes. We provide veterinary services to the greater New York City metropolitan area.

Home
About: Our Team
About Acupunture
& Herbal Medicine